It’s happening – the elite WOOGA Squad is reuniting and you can witness them together in India! South Korean juggernaut BTS member V [Kim Taehyung] will embark on a friendship trip with his actor-musician friends Park Seo Joon, Choi Woo Shik, Park Hyung Sik, and Peakboy in In The SOOP series. The show has earlier featured South Korean groups BTS and SEVENTEEN. The spin-off series, titled In the SOOP: Friendcation, will feature the musician along with his best friends and it is set to premiere on the digital streaming platform Disney+ Hotstar. 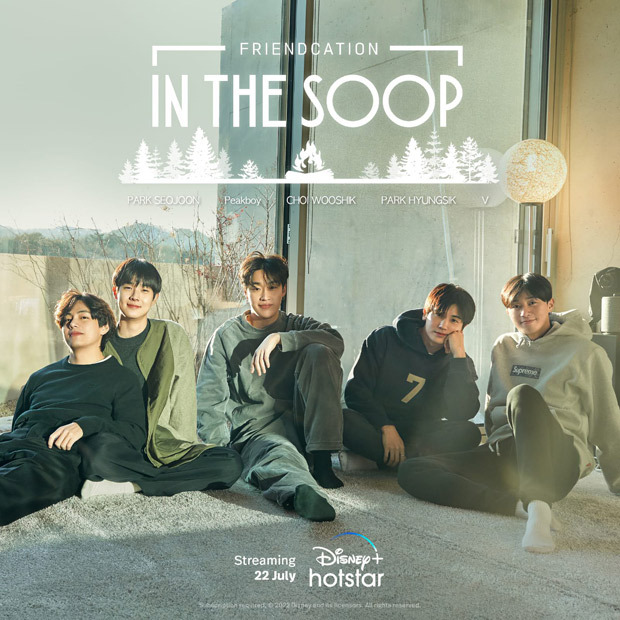 Disney+ Hotstar India confirmed the news that the variety show will premiere on July 22 along with the first poster featuring the five stars. IN THE SOOP: Friendcation gives audiences an unprecedentedly intimate look at the lives of these five celebrity friends, as they step away from “setting the night alight” for a surprise trip to unwind together with a variety of fun, leisurely activities.

Hidden away from the world, this brand-new travel reality series shows the friends taking time to enjoy nature and indulge in their favorite pastimes. Throughout the course of the four-episode series, viewers will get to see the stars decompress, enjoy personal conversations, and recharge over a well-earned break away from the pressures of day-to-day stardom.

In the SOOP: Friendcation will be a four-episode variety show showing the close friendship between the five celebrities who embark on a trip together. The series is set to premiere in July via the JTBC network and also on the streaming platform.

For unversed, BTS’ V made his acting debut in the Korean historical drama Hwarang which was led by Park Seo Joon with Park Hyung Sik as the second lead. Park Seo Joon and Choi Woo Shik worked together in the drama Fight For My Way and Shut Up Family. Peakboy is featured on V’s song ‘Snow Flower’ and all four of them featured in the music video ‘Gyopo Hair’. Last year, they even came together for Choi Woo Shik’s online fan meeting “A Midsummer Night’s Dream” to celebrate his 10th debut anniversary. BTS’ V has crooned OST for Park Seo Joon’s drama Itaewon Class and Choi Woo Shik’s last series Our Beloved Summer.

Meanwhile, on the work front, Park Hyung Sik was recently seen in Soundtrack #1 with Han So Hee. Park Seo Joon recently wrapped the shoot for Dream with IU. He will also make his Marvel debut with The Marvels. Choi Woo Shik was last seen in Our Beloved Summer with Kim Da Mi. BTS’ V is currently promoting the group’s latest release Proof.